THIS EVENT HAS BEEN CANCELED due to unforeseen circumstances. We apologize for any inconvenience this causes. We will have a screening early next year. 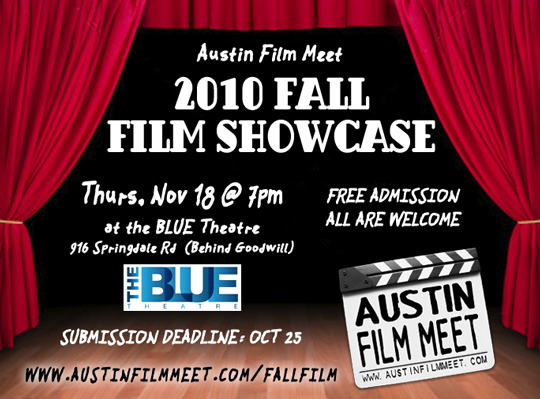 The Austin Film Meet Fall Film Showcase is an annual screening event intended to present recently completed film and video projects with at least one Austin Film Meet member as key cast or crew. Don't miss out on this opportunity to celebrate your recent accomplishment with friends and filmmakers alike.

Please follow the submission instructions provided as part of the Design & Art in Indie Media Exhibit. The Fall Film Showcase event is scheduled during this exhibit period and will be open for viewing at the Austin Film Meet Fall Film Showcase.

Submissions must be under 20 minutes in length. Short films and video of all types, including episodes of web video series, will be accepted. Filmmakers are expected to be in attendance if their film is selected.

No Entry Fee - This Year Only!

(Behind the Goodwill Distribution Center)