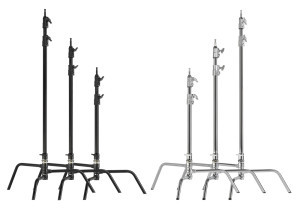 C-Stands are an old-time favorite of film crew. They are incredibly versatile and are a great tool to have in your arsenal.

Need to Know? As an indie filmmaker at any level, you will be expected to know what a C-Stand is and be somewhat familiar with how to operate one and set one up.

"In film production, a C-stand is primarily used to position light modifiers, such as silks, nets, or flags, in front of light sources. The stand is constructed of metal and consists of a collapsible base, two riser columns, and a baby pin on top. In addition, a C-stand includes a gobo head and a gobo arm, which provide the ability to articulate a light modifier without moving the stand itself. The legs of C stands are designed to be nested, so many stands can be placed around a light source."

Sometimes referred to as a grip stand, C-stands are almost always included in the standard grip package. Nicknamed a "Gary Coleman" or a "Billy Barty", a baby C-stand is only 20 inches at its shortest height.

The term "C-stand" derives from the early days of film history, when a standard sun reflector was 100 inches or "century". C stands for century. Today C-stands are manufactured by several different companies.