6 Tips For Creating An EPK For Your Film

There is a lot to think about when making a film, and it's my opinion that the hardest thing that many independent producers will be intimidated by is promoting your work. It is in fact another full time job, which I've been told by many filmmakers they just don't want to take the time to learn how to do. That's unfortunate, because unless you do, no one is going to beat a path to your movie. How can they if they don't know it's there? There are plenty of other articles out there about social media, and I suggest you seek them out, but one of the things that often gets overlooked is the electronic press kit, or EPK. It's very easy to feel the sting of embarrassment when you attempt to reach out to the press as a professional, then have to confess that you don't have one, when they ask. Probably, it will be the first thing they ask you.

I recently put one together for my own film, which I'm in the process of crowdfunding, called The Quantum Terror. Catchy, isn't it? Now that it's done and making the rounds, I thought I'd share a few insights as to what you should be thinking about, when putting one together.

That's a little mantra I learned from Simon Sinek, when he gave a talk about how great leaders inspire action, for TED.com and it's true. If you start off with talking about what you're doing, people will lose interest in a hurry. Instead, start with a statement about why you believe in your movie. I believe in the power of Austin, TX as a film making community. I believe in the magic of practical effects. I believe that it's okay to make movies that are outside the norm, because more than enough people are making films that play it safe. If you believe that too, then you can relate, and probably others are going to want to know more, because you do. The people from the press are no different and they're dying to give something to their readers that they can believe in, too. 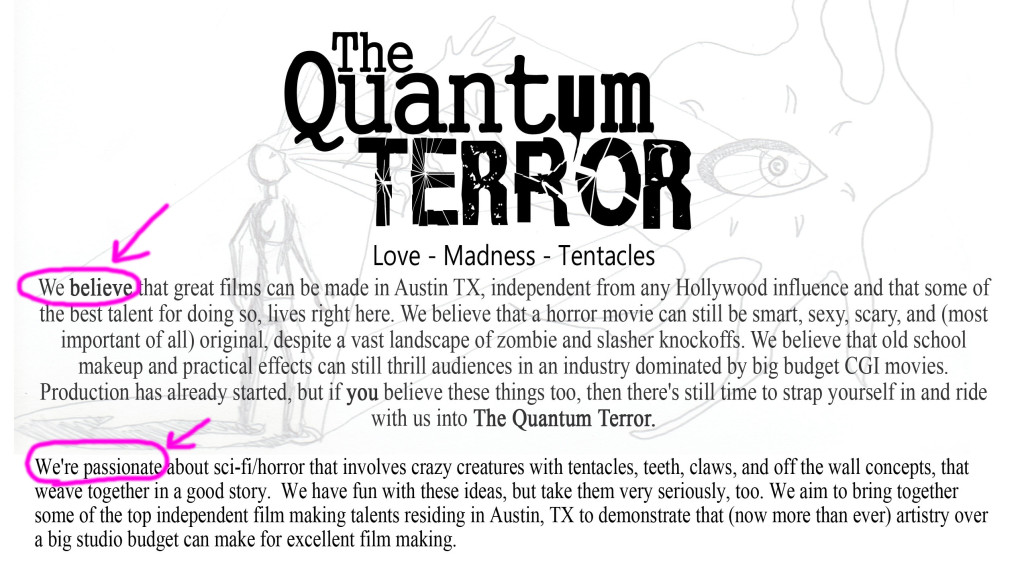 #2: Give them your elevator pitch.

You've heard the story. A young up and coming filmmaker finds himself lucky enough to accidentally get to ride the elevator up with a big Hollywood producer, but he's got 30 seconds before they reach their floor and the door opens. He's got exactly that long to tell him about his big idea. What's the quickest and most exciting way to say it? In the case of your EPK, once you've got people's attention with what you believe, then you can give them the pitch, but don't take long, because people have cat videos to get back to.

#3: Show them there really is a movie.

Artwork! Pre-production photos! Special Effects Tests! Hot Actresses! You need to have photos of these things in your kit, so that people can see that you really are making a movie, and not just talking about making a movie. These are proof of your commitment to action. If your presentation isn't visually stimulating, then it's all pie in the sky. 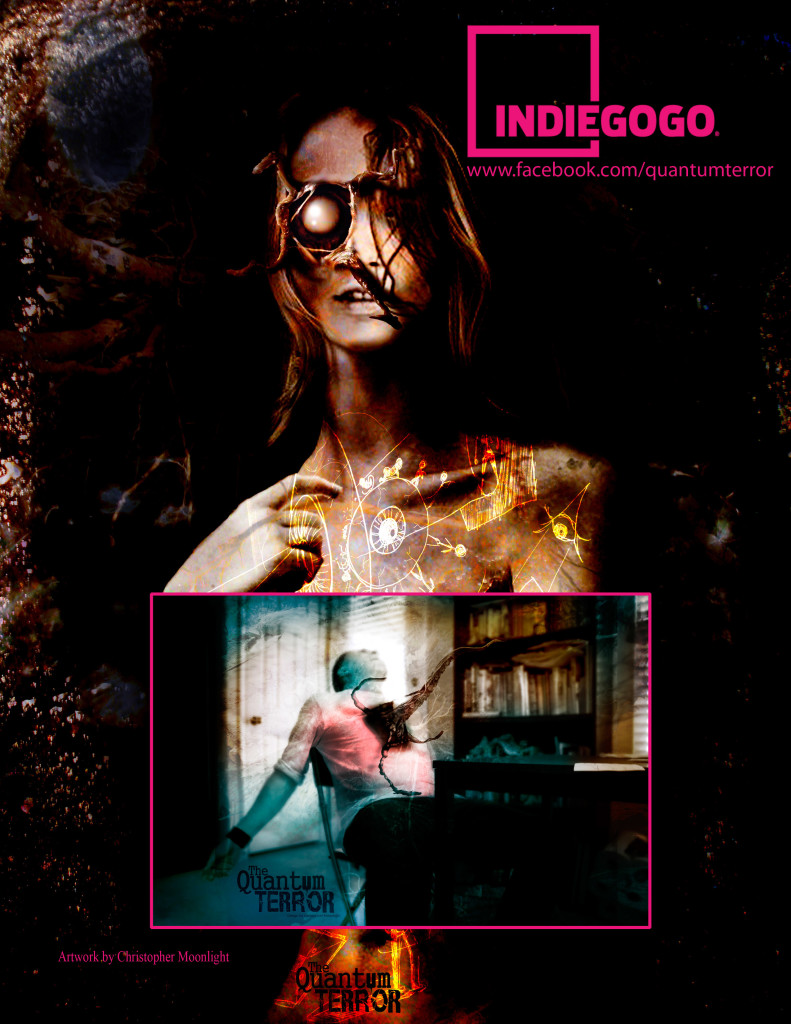 There are many would be film makers out there who go around acting like their a one man film making army. However, any professional worth their salt knows that this cannot be so. Be humble and talk up your actors and crew. If you have pros working on your film, flaunt them. Talk about their past achievements. Link their social media and IMDB pages. You have the honor of being their proud leader, and their going to bring game to your movie that is going to knock everyone's socks off. 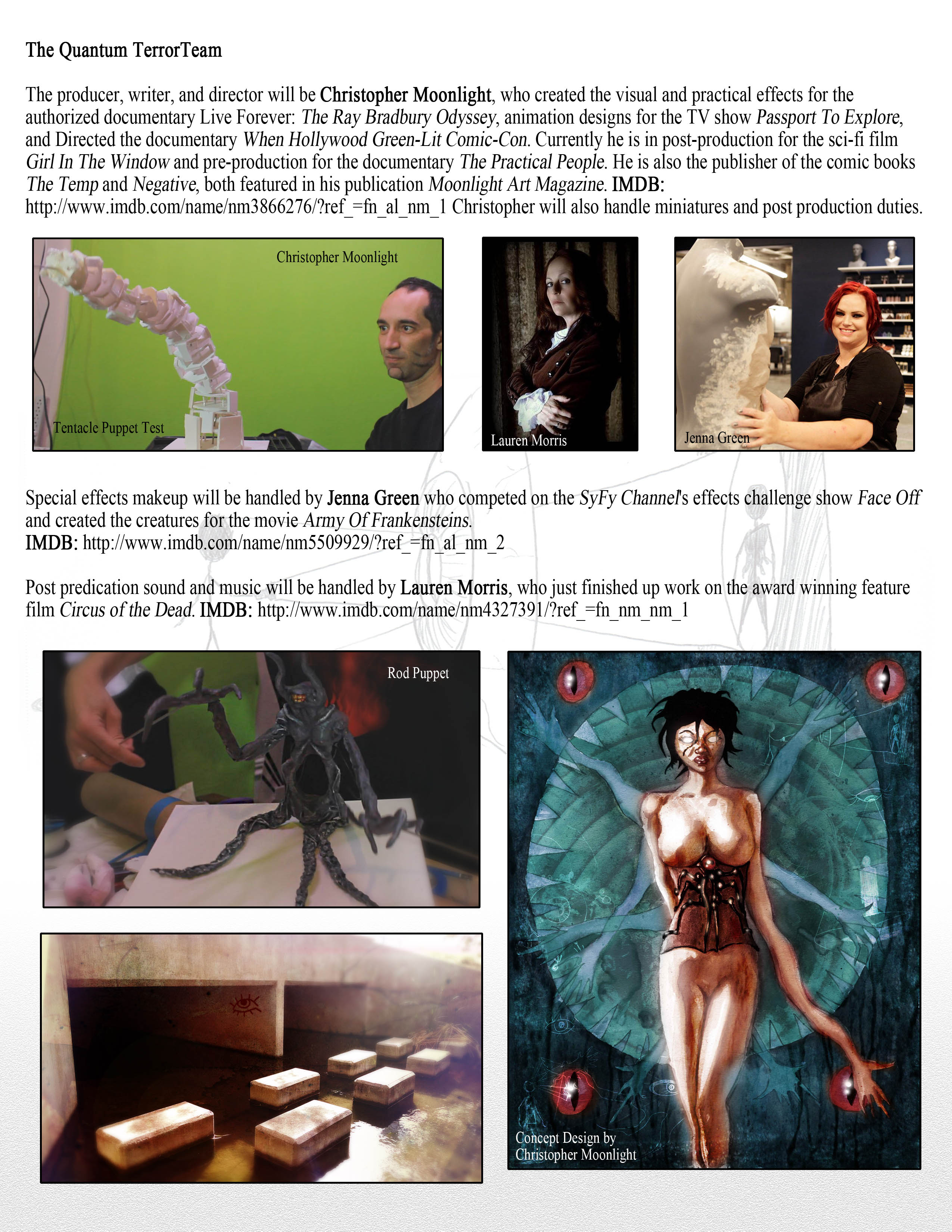 Have someone look over your EPK before you send it out. They'll be invaluable, saving you from being overly long winded, spelling mistakes, and being there to talk over the finer points like buzz or key words, that will help you to connect with your audience, and the press better. There will always be one a-hole that will try to diminish your entire project over a typo. Best not to give them and opening. Let them die alone in their mother's basement, without that one last thing they live fore.

These days, if it can't be shared with the click of a button, it's not going to get shared. Make your kit available to your followers and the press in every format possible, so that it can be shared. Make a gallery with each page of the press kit on your Facebook page. Make a PDF, and upload it to a file sharing site, so people have a link to download it. Click HERE and download mine. If you are going to email it to press, the be prepared to place the entire text of your EPK into the body of your email, so that they can easily copy and past it into any article or review they might do. I've never got enough time in my day for most of the stuff that lands in front of me. Why should I or you expect anyone else to? The more effortless you make it, the  more likely they are to share.

I wish I could say that's all there is to it, but the truth is, that these days the internet has made it so everyone can say anything at anytime. You're adrift in the sea of babble, and if you want to be heard, you're going to have to work for it. No one else will ever care about your project as much as you do, but if you can stand out just long enough to show them that what you're doing applies to them, then you may have a chance. Good luck. 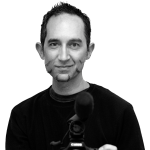 Christopher "Moonlight" Cooksey is a producer, director, production designer and VFX wizard, writer, and publisher. He's been a gallery artist, art teacher, and a designer and an animator for authorized Ray Bradbury documentary and the TV show Passport To Explore. He is now producing his first all green screen Sci-Fi film, two other documentaries, and his online publication Moonlight Art Magazine. He has spent many years developing relationships with other talents in the world of indie film, visual FX, art, and comic books. He has organized teams to create visual effects on micro budgets that look like they cost millions of dollars, storyboarded concepts for movie pitches, published magazines and comic books, in print and on the web, as well as art directed for TV and theater. He works by contracting the right talents and putting together teams to create low budget, yet extremely high quality productions for television, film, and print, whether it be for his own projects, or for other companies, with an emphasis on story telling and visuals. Specialties: Pre-production on a budget. Proficient in Adobe Photoshop, Premier, After Effects, and in combination with practical effect. Excellent skills in design, including drawing, painting, digital matte painting and composite, motion graphics, clay, model and puppet construction, animated and frame by frame storyboards, and comic book art. It's not just about what you create, but knowing how you're going to create it, and make it work.